Early this morning, a Southend party ended with a Bang. A third story balcony collapsed onto a lower balcony, and seriously injured several people. This post will attempt to explain why the balcony may have fallen.

If you remember, we did an earlier post on the Forces Acting on a structure. Mother Nature tries to Push, Pull, Bend and Twist a structure apart. We also Discussed how triangles are the key to a strong structure. 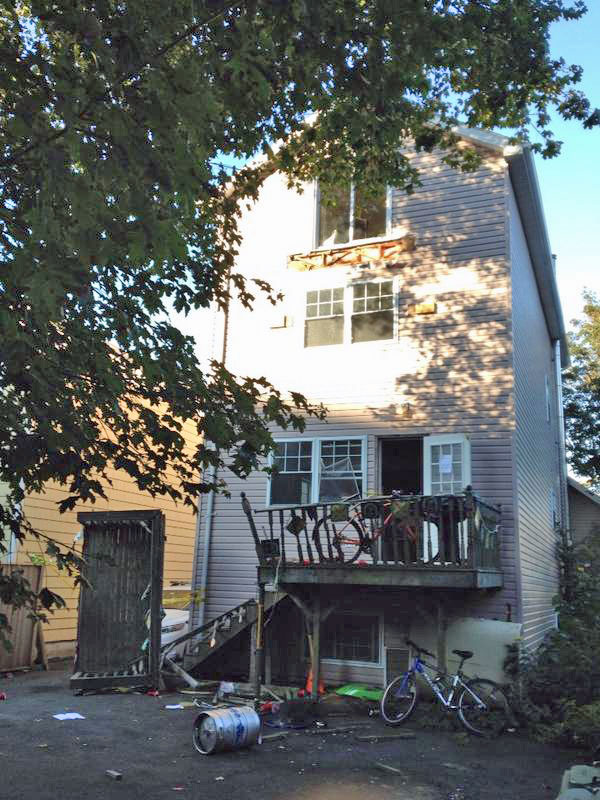 The scene of the collapse after daybreak Saturday. The deck was attached to the home below the sliding doors on the third floor. (FRANCES WILLICK, Chronicle Herald)

From the photos posted by the Chronicle Herald,  the balcony consisted of a wooden platform, anchored on one side to the wall, and the far side by two members on a 45 degree angle to the wall. As the balcony platform is intact on the ground, the platform itself didn’t fail – rather it became detached from the wall. This suggests it was a combination of shear, and bending force that caused the failure.

The entire structure appears to be nailed together. Nails work really well opposing a force perpendicular to the direction they are driven. However, they are less good at resisting forces parallel to their direction. That means if you apply enough force you can pull the nail out. This also means the balcony had to be moving more or less parallel to ground for at least the length of the nails.

For that movement to happen, the triangular supports likely failed.  It is possible, though unlikely, that they actually broke under the load; they probably deflected enough in one direction to pull the nails attaching them to the wall out. This could happen if they moved sideways, as there appears to be limited structure to resist a sideways force on the balcony. If there was a diagonal member between the 2 supports, that would have created additional triangles and resisted the sideways force. It is also possible  that the weight on the balcony could have caused enough bending in one of those members that the nails pulled out. Lastly it’s possible that the material had degraded enough that the nails simply pulled through.

A better design would have been for the balcony to be supported by a beam resting on 2 posts. The load is then handled vertically to the ground,  and the attachment to the house is required to carry a much lighter load.