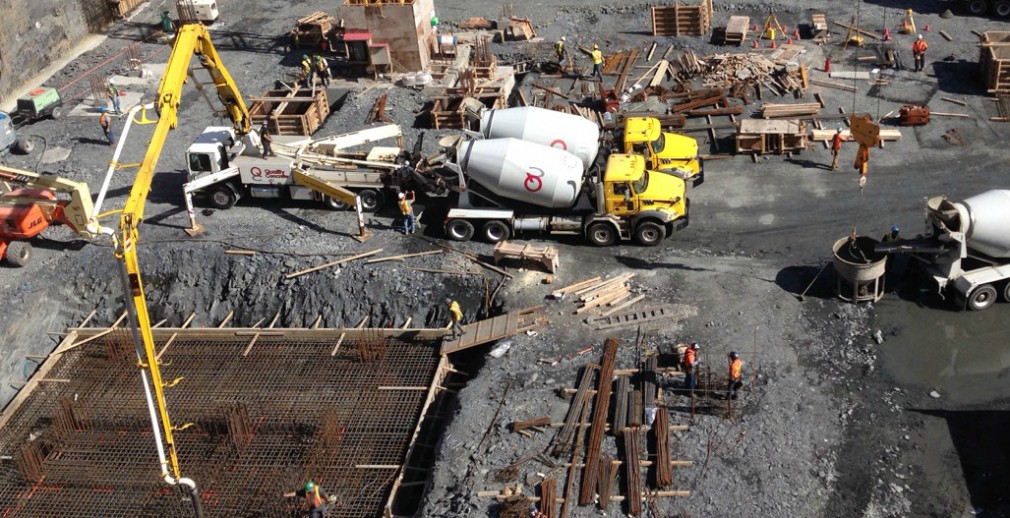 Concrete as a building material has been used since Roman times. If you have been following our Nova Center Construction blog, you will have probably noticed yards and yards of it being poured. This Post will attempt to explain what is going on, and why.

First a few things to know – concrete by itself is best in compression, second, concrete takes about 28days to fully cure, and it shrinks while it cures. Finally, during that curing period, it still requires some support. Finally, for a review of forces acting on a building, please see our Science of Architecture Post on loads, and Forces on a structure.

When we look at the basic process from the ground up,  footings sit

on Bedrock, Columns sit on footings, and floors are supported by columns. The Nova Center sits on bedrock. this makes the foundations relatively simple. On the right is one of the footings being poured. this one sits under several columns and elevator shafts, so it is quite large, however most of the individual columns had their own footing.  A rebar cage is used as well, however this is mostly to control shrinkage and tie in  the columns as this is entirely compressive concrete.

Columns are relatively simple. the footing continues rebar up through the top of its finished level. A Rebar cage is attached to this, and a form placed around it. The form is typically a premade structure that is in 2 pieces and bolts together at opposite corners. when the blots are released, the form comes off. the Column is then poured. In this case, the rebar in the columns is placed towards the out side edges to resist tension forces being applied to the column horizontally. (eg. wind loads) After the Columns have cured, and the formwork removed, Staging can be set up for the floor slabs. These typically consist of shoring, with large timbers across the top supporting the form boards.  there is also a larger form used for flooring which consist of  trusses with adjustable legs, shoring beams and forming deck all as one piece. These can be setup, and then moved as a unit.these are known as flying forms, and at right is one being moved by a crane, you can see the trusses, and form

boards. Flying forms have adjustable feet, and once the slab is cured, they can be lowered, set on rollers and moved out.

On top of the slab form work can be laid the rebar, and any Electrical or plumbing services to be run through the slab.  the edge is formed off, and, if an adjoining section of slab is to be poured, keyed. Adjoining slabs cannot be poured right away due to shrinkage. before pouring an adjoining slab, one must wait for the first section to cure. On the Left, Poured Columns with forming for the Drop Panels in place, and on the left Columns to be poured

When we look at a floor slab, we are typically dealing with a 2 way spanning slab, also known as a flat slab. In a 2 way slab, the beams to support it become flattened and integrated into the slab itself. When looking at the rebar layout, you will typically see a denser pattern running an a Square pattern between the columns and less rebar in the Center. The issue with a Flat slab is that the shear forces at the column can result in a failure of the slab. As a result a Drop Panel is used at column connections to ensure there is more material to strengthen the connection . You can see examples of these in the photo above, which shows  the drop panels in place. The Slab may also be poured with a Stronger mix of concrete at these shear points. You will notice in the photos that the drop panels were poured first. These panels are poured with 50mpa Concrete, whereas the rest of the floor is done with 30mpa concrete.

The load on a slab typically comes from above. the load causes it to bend, so the top is in compression (Which concrete is good at) and the bottom in tension. this is why rebar is placed at the bottom of the slab – the rebar works in tension, so it is placed in the area subject to tension.

There is also a one way slab, where there is a beam supporting the slab. These require more depth,  but can span wider distances. I believe this type of slab is being used on the Argyle street level. The beam and slab are still poured as one piece, however there is a difference in depth. Note the deeper area with the denser rebar – those are the beam portions. The final slab type, is actually found at the very bottom, and this is the slab on grade. This is supported by a gravel base which sits on bedrock for drainage, and contains a thin wire mesh for tensile support. The floor slab, prior to being poured.

A slab on grade simply needs to be formed to give it a clean Edge.

Walls are typically poured in a similar manner to a column, however their forming takes a different shape. The form boards typically are supported by vertical members, which are then reinforced by horizontal members. this makes for a rigid surface that wont deflect under the load of the wet concrete. Form ties are also used to hold the forms an even distance apart. these are eventually snapped off with the rod remaining within the concrete wall. These ties are what are responsible for the round indents you see periodically in a concrete wall. Wall Form. Note the bracing. the empty holes are for the form ties. Pumping offers the most flexibility, and offers a continuous pour a distance away from a delivery truck. Truck mounted pumps come in various sizes. A truck mounted pump can place concrete 70m away.

A truck mounted pump can pump directly to a location (As above), or can also supply a placing arm, as is the case below. Note the arm in this case was pumped by a much smaller pump truck, and was fed by a fixed pipe, running between the arm and the truck. A Placing arm allows pumped concrete to be distributed across a slab. Note the Drop Panels have been poured and finished first.

Trailer based pumps are also available, and can be used to supply a fixed tower based placing system, which climbs as the structure goes up. Pouring a Slab, From right to left, Placing concrete with an arm, shovel/rake to depth, screed with a power screed, and finally hand float.

As Concrete cures, the watery “cream” floats to the surface. this can be first hand floated and eventually mechanically floated to give a clean surface. Ride on Power float. Each side is 2 fans that smooth the surface.