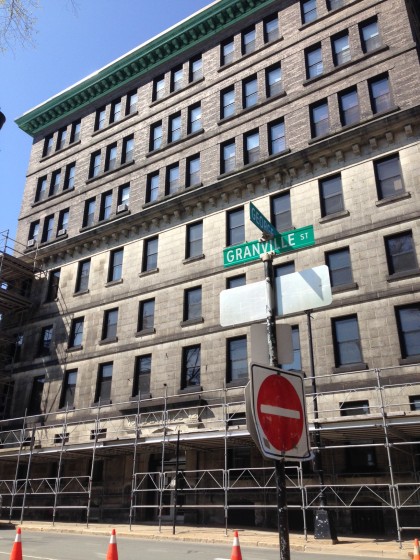 Concerns over the fate of the Dennis building Seem to be well Founded. The Dennis Building was Added to Heritage Canada’s 2013 list of top 10 Endangered Buildings, it now faces the real prospect of demolition

CBC News is reporting that Engineering reports indicate the Dennis Building is beyond saving, and should be demolished. The Minister responsible, Labi Kousoulis, indicates that the building could be down by the fall. The Dennis building was vacated last year due to concerns about mold.

The Conservative MLA from Pictou East, Tim Houston, Sent a letter to the minister bemoaning the waste of $47000 to heat the building over the winter.

The big issues appear to be water penetration through the façade due to its deterioration and lack of maintenance. Water was able to enter the wall Cavity, where it formed mold. This Issue is the fault of successive previous governments who neglected basic maintenance. Lack of maintenance also caused the NS Government to Sell rather then repair the Joseph Howe Building.

The Dennis building is a landmark, and fits nicely into the Province House district, and makes an excellent anchor for a more modern building on the Birks site.  A report was generated some time ago looking at options for Redeveloping the Dennis Building. All the Options were roughly in the 20million dollar mark (Outright demolition would be much cheaper, but would also leave a vacant lot) The Interior Should be Gutted, the exterior stabilized. If the province wont do it, they should sell the building for 1$ to someone who will.

Ironically, this story broke on Friday, Just before the start of National Public Works Week – Recognized by a Provincial Proclamation to celebrate the vital importance of our infrastructure.  and “Public buildings and other structures and facilities essential to serve our citizens.”