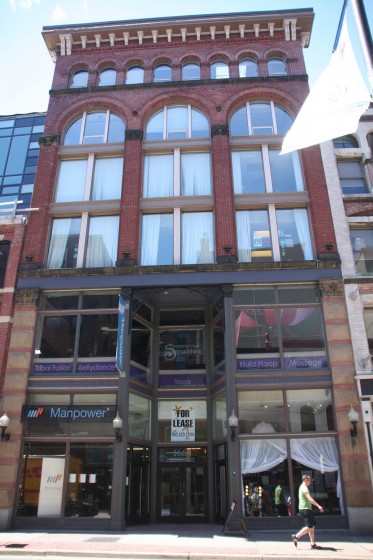 June 20, 2013 BuiltHalifax
Designed in 1894 by architect Edward Elliot in the Chicago Style.The Chicago Style developed after the 1871 Chicago fire, and made use of the latest technologies in building. Chicago style buildings date from 1895-1930, and are typically designed with Metal (cast or wrought Iron and later steel) skeleton structural systems. This freed the walls to only need to support themselves, and allowed for much larger windows then had been possible. view from 1910, Expanded from the invoice below.

The Steel Structure in the Nova Scotia Furnishings Building is Readily apparent as it is exposed on the first 2 floors facing barrington Street. When built it featured the Largest windows in Halifax, and was also the Tallest building on Barrington Street, and featured a passenger elevator. The Building Crosses both Blocks, and also has a brick front on Argyle Street.