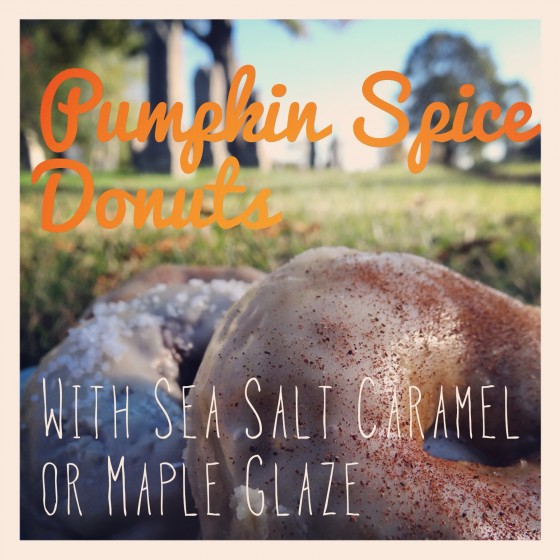 I’ve been patiently waiting to see pie pumpkins in Antigonish, in fact after several unsuccessful trips to the grocery store, I finally asked the produce clerk where they were hiding all the pie pumpkins, and he didn’t actually know what a pie pumpkin was, and suggested I buy one of the pumpkins out front. Oh hells no.

Luckily for me, the Farmers’ Market is bursting at the seams with lovely local produce so I picked up two little pie pumpkins on Saturday and got down to business.

Being Thanksgiving and all I knew I had to make pie, but I’ve been not-so-patiently-waiting to try something else with pumpkins this year… these:

I couldn’t decide which type of glaze to make, so I figured I should probably make both… and then try them both to see which was better… for science.

Preheat your oven to 425 degrees.

The first thing we’ll do is prepare our pie pumpkin(s).

I used two pumpkins so I could make a lot of pumpkin puree for pies, donuts, and more donuts. For this recipe you really only need one, but hey, why not get a couple ready and freeze the puree for later?

To get started, give your pumpkin a good scrub, and then cut that sucker open

and now scoop out all the guts.

This sounds really appetizing, doesn’t it?

You really gotta get in there.

Line a cookie sheet with tin foil and lightly grease it with some butter. Pop those pie halves face down and put them in the oven for about 25-30 mins. When they’re done they’ll look like this

If you’re not sure, poke them with a fork a few times. They should be soft and mushy.

They’ll also be super hot, so give them some time to cool down before you puree them. In the mean time, you can go do something fun like go for a walk, or go buy me a present.

Now that you’re back from whatever fun activity you settled on – oh, what’s that? You have a present for me? How thoughtful! – let’s preheat the oven for baking them donuts. Set ‘er to 325 degress.

Now that your pumpkins have cooled down, you can scoop all the flesh out into a food processor

Keep scoopin’ that flesh out. All of it.

There must be a better way to say that. Flesh? blech. Innards? No that’s worse. Dammit.

Then puree all a dat punkin.

Oh, see what I did there? Yeah. That was terrible. Even for me.

Once you’ve got your spices ready, measure out your sugar and mix the spices in.

Now measure out of a cup of the pumpkin puree and add the mixture of sugar, spice and everything nice* together

*please note this is not actually an ingredient.

Next we will measure out of flour. I use a 50/50 blend of flours from Speerville.

FTR: I recommend giving these flours a solid sifting before you use them.

Now add your eggs to the pumpkin mixture one at a time mixing in between each egg, followed by that melted butter. Then toss in your dry ingredients and milk and mix it all up until it’s all blended together.

Lightly grease and flour your donut pan, and then pipe in your batter.

You should have just enough batter to make exactly a dozen donuts.

Isn’t that just so convenient?

Put the pans in the oven, and let them bake for about 8-10 mins, depending on your oven. You can test them with a toothpick to see when they’re done just like your would with a cake or cupcakes.

While they cool down you can get those glazes ready. We’ll start with the sea salt caramel glaze.

In a small pot, melt your butter and brown sugar together.

Once it’s all melty and starts to bubble a lil bit, add a pinch of the Black Whale Co Atlantic sea salt

give it a stir, and once it starts to boil a lil bit add your whipping cream

Remove from heat, stir, add your vanilla, and stir some more. Then slowly add icing sugar 1/2 C at a time until you reach the right consistency.

Now set it aside and make some maple glaze.

In another small pot, or the same one if you are a keener and washed it out already, melt your butter and then add half your maple syrup and remove the pan from heat.

Now add your icing sugar 1/2 C at a time, and continue adding maple syrup until you get the mapley flavour your heart desires.

The trick with both of these glazes is to keep taste and texture testing it as you add the ingredients.

That’s right, I said you should constantly taste test the glazes as you go. Oh what a terrible task! But for serious, make sure your glaze is thick enough that it will coat that donut real good, but not too thick so it will still run down the sides and make a delicious mess.

Let’s start with the sea salt caramel glazing. Stir up your glaze and make sure it’s smooth and beautiful before you start, then let’s get coating.

To coat your donuts, simply dunk your donut in the glaze

flip it over with a slight flick of the wrist

and put it on a wire rack to drizzle all over the place.

Ok now let’s do the maple donuts. This is going to be really complicated:

Do the exact same thing…

…but in the maple glaze instead of the sea salt caramel this time.

Oh my gosh this is tough.

Now, these glazes do look an awful lot alike, so I suggest adding some extra embellishment so you can differentiate. I went with a sprinkle of sea salt, and a sprinkle of cinnamon. This is very helpful when you need to taste test both donuts to decide which is the ultimate donut flavour champion.

Ummm… is that a picture of donuts in a graveyard? Yes. Yes it is. It’s October aka month-long-halloween-pumpkin-and-ghosts-a-thon, so where else would I possibly take my donuts to be photographed? Geez.

And now for the moment you’ve all been waiting for: The Great Pumpkin Donut Showdown of 2014.

For this intense face-off, I enlisted the help of my dad (not pictured) and my-super-awesome-and-tall friend Sam.

We’re sitting down so we could both fit in the photo. #hestootallandimtooshortproblems

My dad’s voting took place in the comfort of our home, and he was 100% in favour of sea salt caramel.

Now, in my opinion, the best way to judge two competing donuts is to go on a little adventure, and to double fist them. At the Landing. In front of the plethora of healthy people who go there for a nice walk, or those super-keeners out for a run.

We bring a whole new level of intensity to donut judging.

So what was the final verdict?

After careful consideration, Sam voted for maple. So that left me as the deciding vote. If you know me at all you know this would not end well.

I’m going to level with you friends, in a competition this fierce there can be no winner. As usual, I was undecided. Making up my mind is probably the most difficult thing I ever have to do. And really, how could I pick between two wicked delicious donuts?

The only winner here is me, because I got to eat so many donuts trying to decide which was better… for science. That’s my excuse for eating all them donuts. And since I couldn’t make up my mind, I should probably make more. Again, for science, I swear. Not because I have no willpower.